The site is located on coastal plain sediments. The sediments are fine to medium-grained quartz sand to approximately 40 feet deep, where a medium to coarse grained sand layer is encountered. The coarse-grained layer is approximately five feet thick. The coarse-grained layer overlies a fine to medium-grained sand layer with interbedded discontinuous clay lenses. The sediments form a thick, unconfined aquifer. The water table is at approximately 45 feet below grade.

Chlorinated pesticides were used at the site from 1982 to 1984. The release is assumed to be from the accumulation of small spills during on site mixing operations. The impacted soil was located on the property and concentrated in a drainage swale. The pesticides leached from the soil into the ground water forming a plume that was approximately 2,000 feet long and 200 feet wide. Soil source removal was conducted in August 2005 when a total of 1,272 tons of soil were excavated and disposed off-site. Bioremediation was selected to remediate the residual impacted soil and ground water. 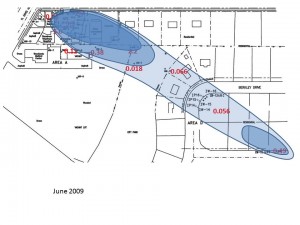 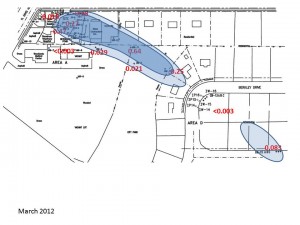