Cl-Out bioremediation was used to remove PCE from ground water at a dry cleaners in Vermont.  CL-Out micorbes were selected for bioremediation of the site because they are compatible with the natural aerobic aquifer conditions.  One application of CL-Out bioaugmentation reduced the PCE concentration by 90% in less than 6 months without increasing the vinyl chloride concentrations. 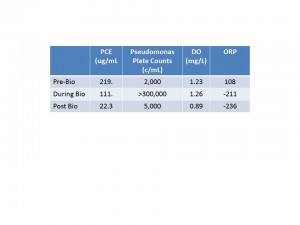