Many times oxygen is injected to improve natural attenuation of petroleum and other contaminants.  The results are often less than expected because the beneficial microbes that the oxygen addition is supposed to stimulate are absent or insufficient in numbers.  Bioaugmentation has been used to improve the results once the oxygen levels have increased but failed to improve the remediation rate.

The following table shows the results of Petrox bioaugmentation at a site in New Hampshire where the operation of an iSOC oxygen-delivery system failed to achieve stimulated bioremediation.  The table shows the improvement of the degradation rates and the achievement of reaching remediation goals.

The oil-field pit treatment demonstrates the effectiveness of Petrox to treat oil production wastes encountered during the closure of multiple lagoons in the Southeast. Regulations required oil and grease concentrations below 1% prior to closure. Petrox reduced the petroleum to compliance levels in less than 30 days.

High concentrations of petroleum in the subsurface can accumulate in a separate liquid phase that floats on the water table, which is referred to as light non-aqueous phase liquid (LNAPL). Investigation and characterization of the extent of separate phase petroleum is challenging. In turn, successful remediation, which depends on accurate and complete site characterization, can be equally challenging. In this case study Petrox® bioaugmentation was used to remove LNAPL and dissolved-phase petroleum to achieve No Further Action status.

The site is located in the Georgia Piedmont where the geology is characteristically weathered granite and saprolite. The petroleum was found in layers of interbedded clay, silt and sand. The first water was encountered at approximately 28 feet below ground surface. The hydraulic conductivity based on slug tests of the impacted zone was 10-4 to 10-5 cm/sec.

The ground water aquifer was naturally aerobic. Dissolved oxygen measurements taken from monitoring wells in the source area ranged from 1.9 to 2.1 mg/L. The oxidation-reduction potential (ORP) measured in the same wells ranged from 241 to 283 mv. The aerobic conditions were not typical of petroleum releases, but favored in situ bioremediation.

During the implementation of bioremediation, the region experienced a drought. The water table dropped below the bottom of some of the monitoring well screens for part of the period. Sampling results may have been affected during the drought, but normal ground water conditions were restored and maintained for the final two years of monitoring.

The leaking underground storage tank (UST) was removed and a temporary high-vacuum dual phase extraction system was operated for one day in April 2007. Approximately 50 gallons of petroleum was removed by the high vacuum system. After operation of the high vacuum system was discontinued, the source area total benzene, toluene, ethyl benzene and xylene concentrations was more than 143,000 µg/L and 22 inches of separate phase petroleum was found in a monitoring well outside of the former UST cavity.

The remediation goals were to remove the separate phase product and reduce the dissolved phase BTEX concentrations to below in-stream water standards.

The remediation approach was combination of in situ Petrox® bioremediation and periodic liquid phase bailing. It was believed that the petroleum was present in a thin layer, but represented itself as a thicker layer in the monitoring well that intersected the layer. The separate phase was bailed out when it was encountered during monitoring events.

Petrox® bioremediation was used to degrade the petroleum in the ground between the former UST cavity and the impacted down gradient monitoring wells. Petrox® was introduced into the contaminated ground water in three applications by injection through nine temporary well points surrounding the former UST location. 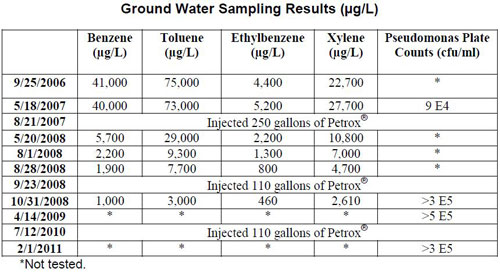 The analysis of ground water samples for Pseudomonas sp. by plate count analysis showed the microbial population increased over background levels. The Petrox population maintained an effective level for bioremediation for 6 months to a year following each application.

The separate phase was reportedly no longer present in 2011 and the site received a No Further Action Status designation.

This project demonstrates the benefits of bioaugmentation for high concentrations of petroleum in ground water. Bioaugmentation delivers very high population of effective petroleum-degrading organisms that can be sustained for a long time. The microbes are compatible with bailing out accumulated separate phase from monitoring wells to accelerate the site closure. The total cost for microbes used to close this site was $8,000.