Dinitrotoluene (DNT) may occur in soil and ground water as the result of spills and historical use of the chemical as a solvent and industrial intermediary or as a residual of explosives at military facilities.  CL Solutions and SpecPro, Inc. conducted a treatability study to determine the effectiveness of CL-Out microbes in the removal of DNT from contaminated ground water at the Badger Army Ammunition Plant (BAAP) near Baraboo, Wisconsin.  The treatability study showed the removal of all six isomers of DNT, with a 53% to 91% removal in 21 days.  Intermediate by-products were detected only temporarily during the treatability study.  For more detailed information call CL Solutions.

By switching from active extraction to in situ CL-Out® bioremediation, In Control Technologies, Inc. of Houston, Texas saved their client $100,000s in on-going operation and maintenance costs.  The Site was a shopping center where soil and ground water were contaminated by dry cleaning chemicals.  A dual phase extraction system was installed and operated for 9 years.  The dual phase system reduced the total CVOCs by 70%, but the contaminant removal rate  reached the limit of cost effectiveness.

By switching to bioremediation, the client avoided $75,000 on-going annual operation and maintenance cost with a $20,000 investment in bioremediation. CL-Out® bioremediation reduced the residual contamination by more than 98% in less than 90 days.  This case study was reported at the 9th In Situ and On-Site Bioremediation Symposium, 2007

Irwin Engineers, Inc., of Natick, Massachusetts has undertaken a similar approach to reduce on-going pump and treat remediation costs at a site of perchlorate contamination.  Irwin Engineering presented that case study at the AEHS Soils, Sediment, Water and Energy Conference (2013).

Aerobic cometabolism of PCE and other halogenated solvents by Pseudomonas sp.  has been well established for more than 20 years.  The following research articles were key in the development of this approach to bioremediation.  This academic research provided parallel support to CL Solutions’ successful application of aerobic cometabolism to bioremediation of hundreds of contaminated sites since 1999.

CL-Out bioaugmentation was used to reduce the TCE concentrations in ground water at an industrial site in Louisville, Kentucky.  CL-Out microbes were injected into the TCE-contaminated ground water.  Dextrose was added to provide the carbon source for the microbial growth.  An oxygen supplement was necessary to maintain aerobic conditions in the aquifer.

Ground water sampling downgradient of the injection points showed that the CL-Out microbial population achieved a target population of 1 million cfu/ml and maintained an effective population for at least 60 days.  During that timeframe the TCE concentrations were reduced by 90%. 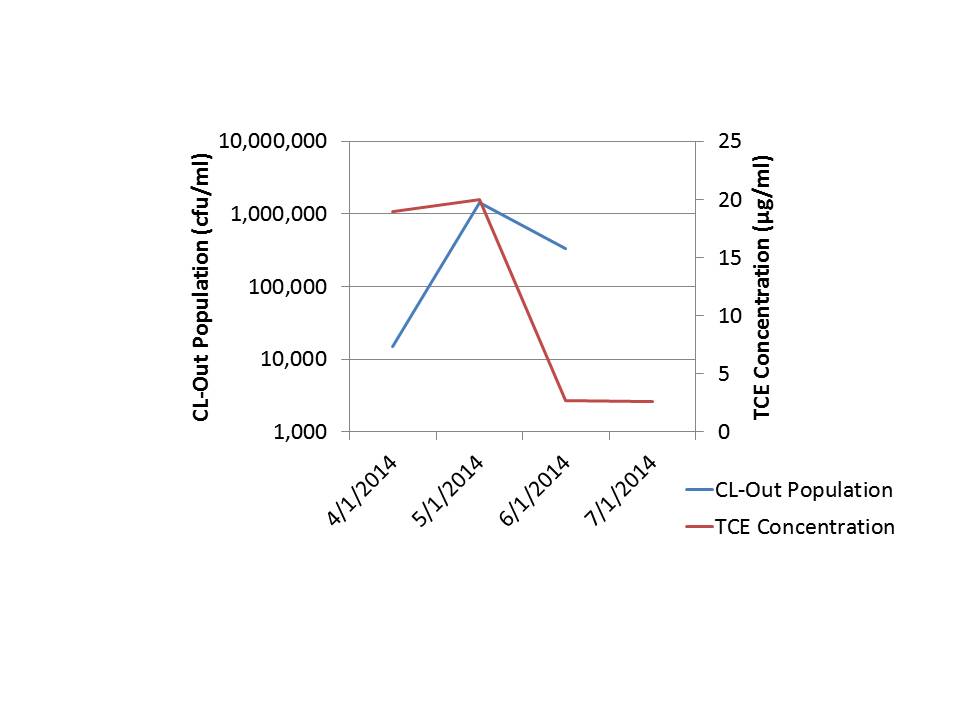 CL-Out® bioaugmentation was used to remediate ground water contaminated by 1,1,1-trichloroethane (1,1,1-TCA) and 1,1-dichloroethene (1,1-DCE). The 1,1-DCE was formed as a product of the natural abiotic degradation of 1,1,1-TCA. The bioremediation was implemented as a pilot study and a subsequent interim action for source removal.

CL-Out® was introduced into the contaminated ground water in the suspected source area by injection through temporary well points up gradient of the monitoring point. The initial application was in March 2007 and a subsequent application was completed in September 2007.

This project demonstrates several of the benefits of aerobic bioaugmentation. CL-Out® organisms were able to metabolize the parent chloroethane compound and the daughter product, which was a chloroethene compound. The metabolic diversity of the CL-Out® organisms facilitates enables the bioremediation of mingled plumes and multiple contaminants. Bioaugmentation provides active control of the site as effective organisms compatible with the site conditions were injected where they were needed for quick contaminant removal.