Degreasing solvents were found in the ground water at an industrial manufacturing facility in Tampa, Florida.  The solvents include PCE and its associated breakdown products. The source of the ground water contaminants was found to be a former water treatment system drain field.  CL-Out® bioremediation was implemented to reduce the volume of contamination in the source area and down gradient. CL-Out® is a consortium of Pseudomonas sp. that produces constitutive enzymes to cometabolize PCE and other halogenated solvents.  Dextrose is added with CL-Out® to provide a substrate for microbial growth.  Application of CL-Out® bioremediation at this site reduced the total chlorinated solvent concentrations as much as 99% in less than 6 months.

The site is located in Tampa, Florida where the geology is characteristically interbedded silt and sand.  The background ground water redox conditions of the aquifer are not known.

CL-Out bioremediation was implemented in the ground water to accelerate the remediation of the source area.  A 55-gallon slurry of  CL-Out was injected on February 11, 2003.

Monitoring wells in the source area and surrounding area were sampled to assess the progress of the remediation.   The following table shows the pre-treatment and post-treatment CVOC concentrations in a source area monitoring well (MW-1) near the application of CL-Out.

After application CL-Out bioaugmentation the chlorinated solvent concentrations in MW-1 decreased by as much as 99%.  Overall the total mass of contamination was significantly diminished by the bioaugmentation in a short period of time to accelerate the natural degradation.

CL-Out was used to complete the remediation of ground water contaminated by chlorinated solvents from a former dry cleaning site in Rockville, Maryland.  The ground water contamination had migrated from leaking sewer lines to underlying bedrock fractures.  Fenton’s Reagent was first applied to the site, but the PCE concentrations increased due to desorption.  Subsequently, sodium permanganate was applied to the site.  After the application of 5,000 kilograms of sodium permanganate in 50 locations, the PCE concentrations decreased from the post-Fenton’s Reagent high, but was still three times higher than the original concentrations.

The conditions of the aquifer shifted to more aerobic after the chemical oxidation.  CL-Out aerobic cometabolism was applied to remove the residual contamination and accelerate natural attenuation.  CL-Out was applied in one 165-gallon injection followed by the addition of dextrose as a cometabolic substrate. The natural recharge of oxygen and residual iron, sulfate and manganese are believed to be the electron acceptors for the cometabolism.

According to the reporting author, ” bioremediation is very effective at treating chlorinated solvent contamination at the site.”

CL-Out microbes have been used at many sites in the US and Canada to remove PCE contamination from soil at dry cleaners and other industries where solvents are used. CL-Out is a consortium of microbes selected for their ability to cometabolize chlorinated solvents under aerobic conditions.  The microbes are pumped into the soil through small boreholes in the building or surrounding area.  Once in the soil, the microbes produce metabolic enzymes that convert the PCE into carbon dioxide and water without generating harmful by products.

The following case studies are examples of how quickly and cost effectively CL-Out bioremediation removes the soil contamination:

CL-Out bioremediation reduced concentrations of dry cleaning solvents in soil to allow for the redevelopment of a property into luxury condos.  After the old building was removed, the contractor mixed CL-Out microbes into the PCE-contaminated soil.  After 90 days the soil was tested to verify success.

The 90-day sampling showed that the remediation met the site cleanup standards.  PCE was reduced by more than 95% from a maximum of 3,100 mg/kg to less than 120 mg/kg.  A “No Further Action” letter was submitted to IEPA.  The CL-Out cost for the project was $13,000.

At a site in southern California, the soil and ground water contamination was removed at at operating dry cleaners without interrupting the business operations.  CL-Out microbes were injected into the soil and ground water through small-diameter borings.  Inside the building, hand-dug borings less than 3-inches in diameter were used for the treat the soil. Two drums of CL-Out microbial solution were injected into 80 cubic yards of contaminated soil.

After 30 days soil sampling showed the PCE concentration was reduced by 85% from 775 ug/Kg to 115 ug/Kg.  No daughter product were generated during the bioremediation.

The ground water was treated simultaneously and the contaminant concentrations were reduced by more than 90%.

The cost for CL-Out to treat both soil and ground water was $9,500.

Call CL Solutions to discuss removing the vapor intrusion risk at your property.

The Massachusetts Department of Environmental Protection awarded Irwin Engineering of Natick, Massachusetts the 2016 Greener Cleanup Leadership Award for the innovative in situ bioremediation of perchorate contamination of soil and ground water at the Concord Road Site in Billerica, Massachusetts. The award honors LSPs and their clients for promoting greener cleanup principles and practices to reduce the overall net environmental footprint of hazardous waste site cleanup response actions under the Massachusetts Contingency Plan.

In addition to implementing best practices, Irwin Engineers was able to close the site at least 5 years sooner and saving their client over $5 million. The site cleanup achieved residential soil standards without site use limitations and achieved ground water levels protective of drinking water.

Site Summary
CL-Out® bioaugmentation was implemented in combination with dual phase extraction at an industrial site near Houston, Texas to remove trichloroethylene (TCE) from ground water. The overlying contaminated soil was excavated, but perched ground water and a deeper aquifer had TCE concentrations greater than 10,000 µg/L. A dual-phase vacuum extraction system was installed to control the ground water gradient and increase distribution of the CL-Out® organisms in the aquifer. The TCE concentrations were reduced by 99.9% in one year.

Geology and Hydrogeology
The site is located on coastal plain sediments characteristically interbedded sands, silts and clays. The first impacted ground water was a thin perched layer 16 to 18 feet below ground surface. A more transmissive, water bearing zone was at 25 to 30 feet deep. Both water-bearing layers and the interbedded fine-grained layers had TCE concentrations above regulatory standards.

CL-Out® was applied eight times between January, 2010 and February, 2011. During each application 55 to 110 gallons of CL-Out® was injected into the ground water. The dual-phase extraction system was used to control the ground water gradient and induce greater distribution of the CL-Out® microbes. Periodic plate count analysis of the microbial population in the treated aquifer was completed to guide where and when the CL-Out® population should be supplemented. The repeat applications were on approximately 4 to 6 week intervals. 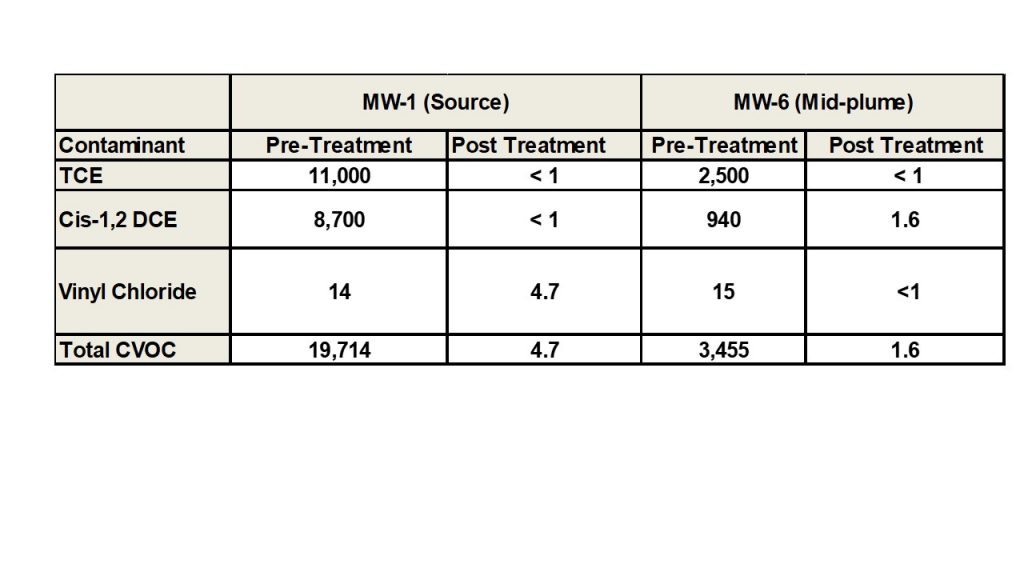