A history of spills and/or releases at two adjacent dry cleaning facilities near Houston, TX, resulted in significant soil and shallow groundwater contamination with PCE and daughter products. Soil was relatively permeable, with rapid groundwater flow beneath the site. A long, narrow, off-site plume extended beneath a residential neighborhood. Chemical oxidation was employed initially with only limited success in the areas of highest contamination. To take advantage of the soil permeability and other site conditions, the response action was amended to include enhanced aerobic bioremediation by cometabolism. Specialty microbes were introduced into the plume in several injections over a 15-month period. This approach achieved total contaminant level reductions in the source area from 1,600 to less than 40 µg/L, and at the front edge of the plume, levels decreased from 500 to 5 µg/L. 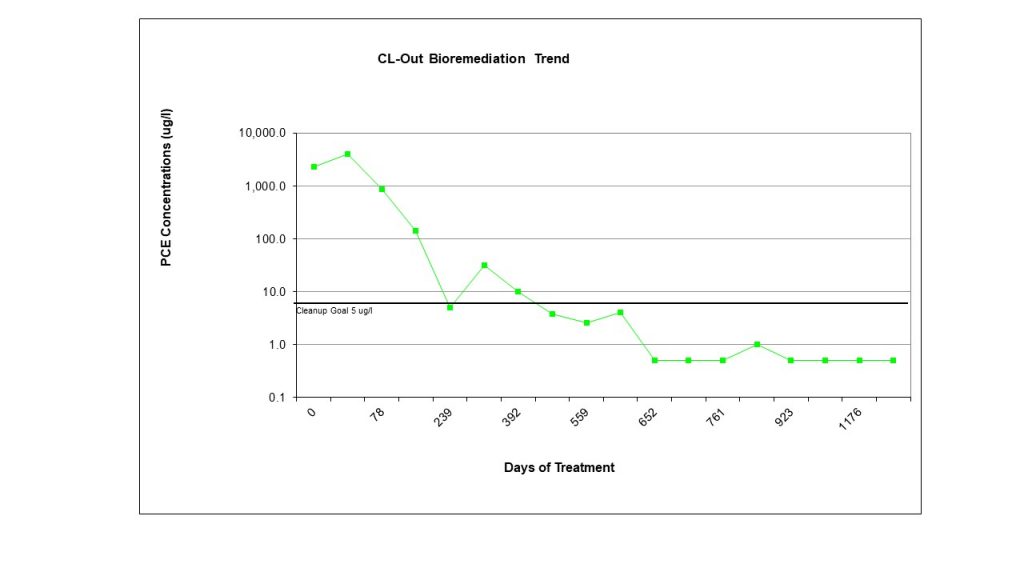 Dry cleaning solvents were found in the ground water adjacent to a dry cleaning facility located in a commercial shopping center in Houston, Texas. InControl Technologies, Inc. of Houston, Texas was the environmental consulting firm that completed the site investigation and remediation.

CL-Out® bioremediation was implemented to reduce the mass of contamination in the source area. CL-Out® is a consortium of Pseudomonas sp. that produces constitutive enzymes to cometabolize PCE and other halogenated aromatic compounds.  Dextrose is added with CL-Out® to provide a substrate for microbial growth.  Application of CL-Out® bioremediation at this site achieved the cleanup goals in less than 6 months.  The cleanup goals were maintained for more than one year to achieve project closure.

The site is located on a coastal plain where the geology is characteristically interbedded silt and sand deposits overlying a thick cohesive clay formation.  The affected aquifer was a silty sand zone approximately 40 to 55 feet below grade.  The aquifer ground water yield was low and the ground water was classified as Class 3 ground water.

The ground water aquifer was naturally aerobic.  Dissolved oxygen measurements taken from monitoring wells in the source area ranged from 2.6 to 5.4 mg/L.  The oxidation-reduction potential (ORP) measured in the same wells ranged from 89 to 303 mveq.  The aerobic conditions of the aquifer favored aerobic CL-Out® cometabolism.

Monitoring wells were installed on all sides of the dry cleaners, but access restrictions prevented the installation of monitoring wells inside the building.  The site layout including sampling and treatment locations are shown on the attached figure.  PCE and concentrations of daughter products, including TCE and cis-1,2 DCE were found in ground water adjacent to the dry cleaners and down gradient businesses.  PCE concentrations in the source area ranged from 0.260 mg/L to 0.860 mg/L prior to remediation.  The TCE concentrations ranged from 0.031 mg/L to 0.085 mg/L. The cis-1,2 DCE concentrations ranged from 0.096 mg/L to 0.67 mg/L.  Vinyl chloride was not detected prior to remediation.  The sampling results are summarized in the attached table.  The contamination plume was estimated to be 7,500 square feet.

While the presence of breakdown products suggested natural attenuation by biological destruction was occurring, bioaugmentation was implemented to accelerate the site remediation.

CL-Out bioremediation was implemented in the ground water in the source area and accessible down gradient locations.  Most of the down gradient plume, however, was inaccessible for direct treatment.  Due to limited access, the down gradient areas were treated by attenuation as the source mass was destroyed up gradient.  Eight temporary injection wells were installed around the dry cleaner building and source area.  The injection points were set with 10-foot-long screened intervals from 40 to 55 feet deep.  The temporary injection wells allowed for repeat inoculations without additional drilling costs.

Ground water samples were taken from the monitoring wells for laboratory analysis for the contaminants and field measurements of dissolved oxygen and ORP.  The field parameters show that after application of CL-Out® bioaugmentation the dissolved oxygen levels and ORP decreased.  This decrease confirms aerobic metabolism was taking place.  The PCE and TCE concentrations also decreased immediately following the injections.  However, there was also an increase in the cis-1,2 DCE concentrations following the bioaugmentation.  The cis-1,2 DCE concentrations decreased to the pretreatment levels in each of the source area wells except MW-4 during the post treatment monitoring.  Vinyl chloride was detected in MW-1 and occasionally in MW-8 and MW-11 after bioaugmentation, but persisted in only MW-1.  Maintaining aerobic conditions would have reduced or prevented the accumulation of the daughter products. Nevertheless, the daughter product concentrations did not exceed the Class 3 Standards applicable to the site.

The following tables show the PCE concentration trends during remediation.  MW-2, shows the concentration of PCE in a well outside of the treatment area remained relatively constant during the same time.

After one year, the contaminant concentrations continued to meet the cleanup goals in the source area and a Certificate of Completion was recommended for the project.  The total CL-Out® remediation cost was less than $10,000.  More information can be obtained by contacting CL Solutions at 513-284-5940 or www.cl-solutions.com.

Leaks from an aboveground solvent tank impacted soil and ground water quality at a manufacturing site in Illinois.  The impact was found under the adjoining building as well as the area near the tank.  The soil and ground water were treated in situ with CL-Out® bioremediation microbes.  Through cometabolism CL-Out® microbes reduced the contaminant concentrations to acceptable levels in less than one year.

CL-Out® bioremediation quickly and cost-effectively reduced the contaminant concentrations to acceptable levels.  Through cometabolism the parent and daughter products were removed simultaneously.  CL-Out® bioaugmentation accelerated the site remediation and reduced uncertainty by applying the right microbes where they were needed.

Degreasing solvents were found in the ground water at an industrial manufacturing facility in Tampa, Florida.  The solvents include PCE and its associated breakdown products. The source of the ground water contaminants was found to be a former water treatment system drain field.  CL-Out® bioremediation was implemented to reduce the volume of contamination in the source area and down gradient. CL-Out® is a consortium of Pseudomonas sp. that produces constitutive enzymes to cometabolize PCE and other halogenated solvents.  Dextrose is added with CL-Out® to provide a substrate for microbial growth.  Application of CL-Out® bioremediation at this site reduced the total chlorinated solvent concentrations as much as 99% in less than 6 months.

The site is located in Tampa, Florida where the geology is characteristically interbedded silt and sand.  The background ground water redox conditions of the aquifer are not known.

CL-Out bioremediation was implemented in the ground water to accelerate the remediation of the source area.  A 55-gallon slurry of  CL-Out was injected on February 11, 2003.

Monitoring wells in the source area and surrounding area were sampled to assess the progress of the remediation.   The following table shows the pre-treatment and post-treatment CVOC concentrations in a source area monitoring well (MW-1) near the application of CL-Out.

After application CL-Out bioaugmentation the chlorinated solvent concentrations in MW-1 decreased by as much as 99%.  Overall the total mass of contamination was significantly diminished by the bioaugmentation in a short period of time to accelerate the natural degradation.